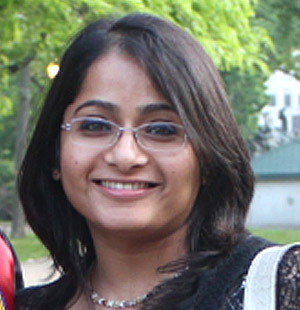 A passionate scientist with years of experience and lots of achievements to show for
it, Harita started her science journey when she attended Sri Venkateswara College (Delhi University), India to get a BS in Zoology. During her graduating year, Harita’s efforts didn’t go unnoticed as she was awarded the Senior Class Award (Balaji Gold Medal) in Zoology from the University of Delhi, South Campus. She then got her MS degree in Marine Biology from Cochin University of Science and Technology, Kerala, India where once again she proved her academic excellence and was declared the topper of the class of 2005, Marine Biology. She moved to the United States in 2006 to pursue a PhD in Biotechnology from Worcester Polytechnic Institute (WPI) in Massachusetts.

Along with her passion for scientific inquiry she is equally enthusiastic about teaching and spreading the knowledge she has acquired. During her doctoral training at WPI she participated in numerous science outreach events where she inspired inner-city students to participate and get excited about science through demonstrations and hands-on experiments. She has also mentored numerous undergraduate students in common molecular, genetic and cell culture skills. She continues to grow as a scientist and refine her mentoring skills as a postdoctoral fellow at Rutgers.
Harita has done numerous presentations including poster presentations at National
conferences such as Society for Neuroscience and Society for Developmental Biology. She has also won awards for her presentations skills at the University wide poster presentation events at WPI in 2007 and 2011. She was awarded the prestigious NIH fellowship, Institutional Research and Career development Award (NIK, K12) in 2014 to support advancing her scientific and teaching aspects of her career.

And with all these achievements, Harita still believes that this is just the starting point, as her greatest achievement will be to bring a positive change in peoples lives by utilizing all the scientific knowledge she has gathered over the years. What can we hope for this unrepentant achiever other than to wish her best of luck in her future task of taking up this business in Health Media as she believes in giving back to the society and has taken up the project SEHAT TV. With her connection in the health, medical and the science industry she is all set to make the difference.